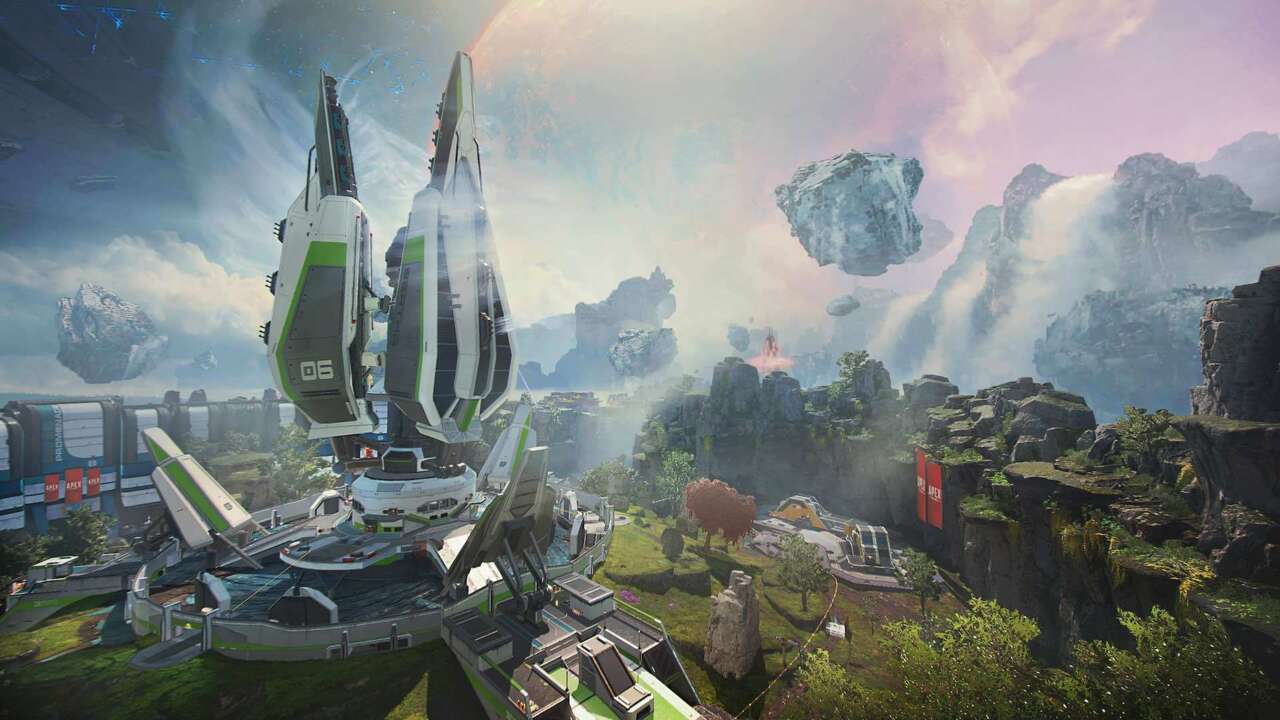 Apex Legends Season 15 is lunar-themed; it’s titled Eclipse and features ferrofluid-wielding technowitch Catalyst as a new playable character. The season adds a brand-new battle royale map to the game as well. Named Broken Moon, the new map is located on a lunar colony built upon Cleo, the partially destroyed moon of Boreas, which is the home planet of both Catalyst and Seer.At a preview event, the Apex Legends team walked the press through the development process surrounding Broken Moon and talked about the inspirations for coming up with the look and feel of the map. According to the team, the aesthetic design of Broken Moon aims to explore both the dark and light sides of the moon and celebrate the culture of Boreas and Cleo–two celestial bodies we haven’t seen much of since the Stories from the Outlands: Metamorphosis trailer, which released just prior to the start of Season 10. 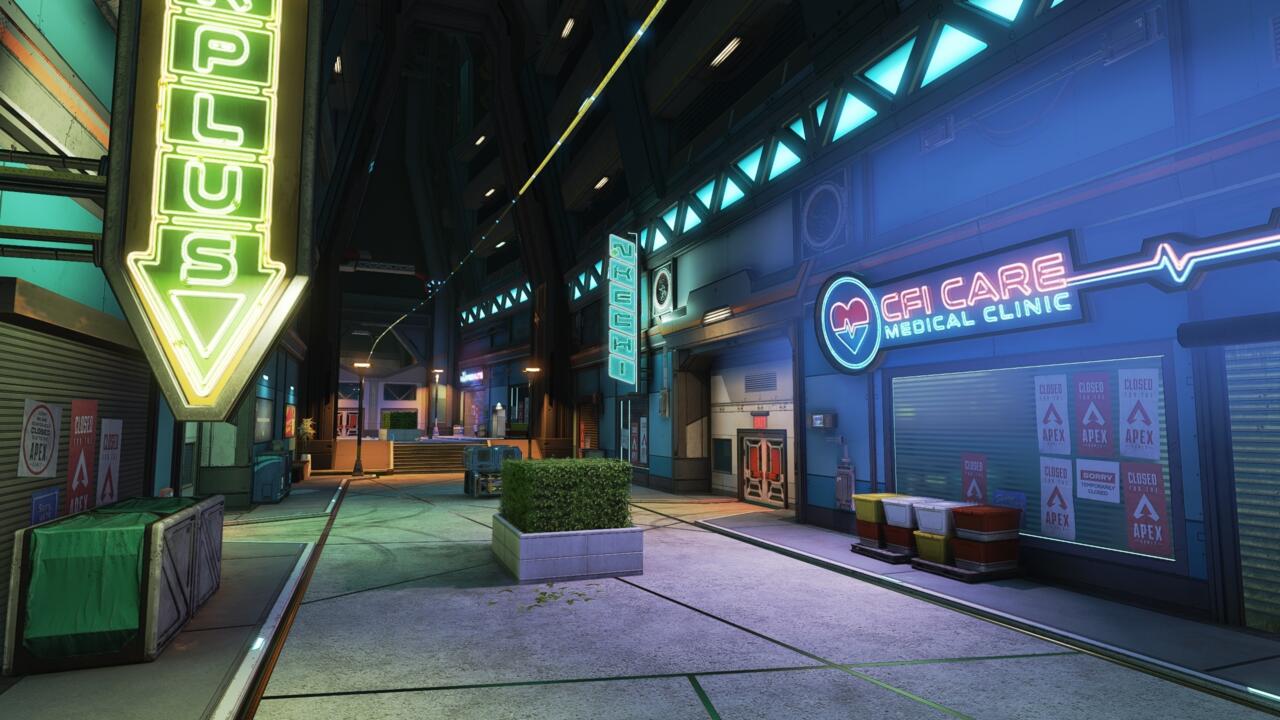 The Apex Games aren’t just moving in and using the lunar colony as is. The organizers are adding their own touches to the location. The big adjustment is the addition of zip rails, a new navigation mechanic that functions similarly to ziplines, but you travel along them more quickly and zip rails can snake through the map as opposed to being limited to a straight line. »The majority of them I would say are on the outer perimeter of the map, » Shaw told me. « There’s a few that bring you towards the interior, but one of the main goals for these was to create this interconnectedness of the edge of the map because we found when you land or when you choose an edge POI, at that point, because of the ring behavior and stuff, you beeline to the middle or towards the ring. So adding these allows you to play the edge of the map a lot more efficiently. »Zip rails come to Apex Legends following the Season 14 update, which both hastened how quickly the first ring closes and increased how much damage it deals. That update has fed into a trend that Respawn noticed has been going on for a while: fewer and fewer players are spending time on the edges of each map, and after landing there, they’re all moving toward the center as quickly as possible. It’s just harder to remain on the edges of Apex Legends’ maps when there’s so much ground to cover and not much time to do it. And with so many squads moving towards the center at once, it contributes to an increase in third-partying (the act of moving on an already started engagement to take advantage of both squads being weakened). With zip rails, Respawn hopes to incentivize players with remaining on the edges of Broken Moon a bit longer, further spreading out squads for the first few rounds of each match. »[Zip rails] are broken into routes and segments, » Shaw told me. « You might have some that are a couple segments long, so you’d get on, you’d get off, you’d stop, loot up at what we call, ‘Destination Buildings,’ and then you’d get onto the next [zip rail]. But they’re not all completely 100% interconnected. You always will hit a point where you have to get off it and walk on foot. That was really important to us, that we don’t circumvent that part of the game because that’s really important to us. » 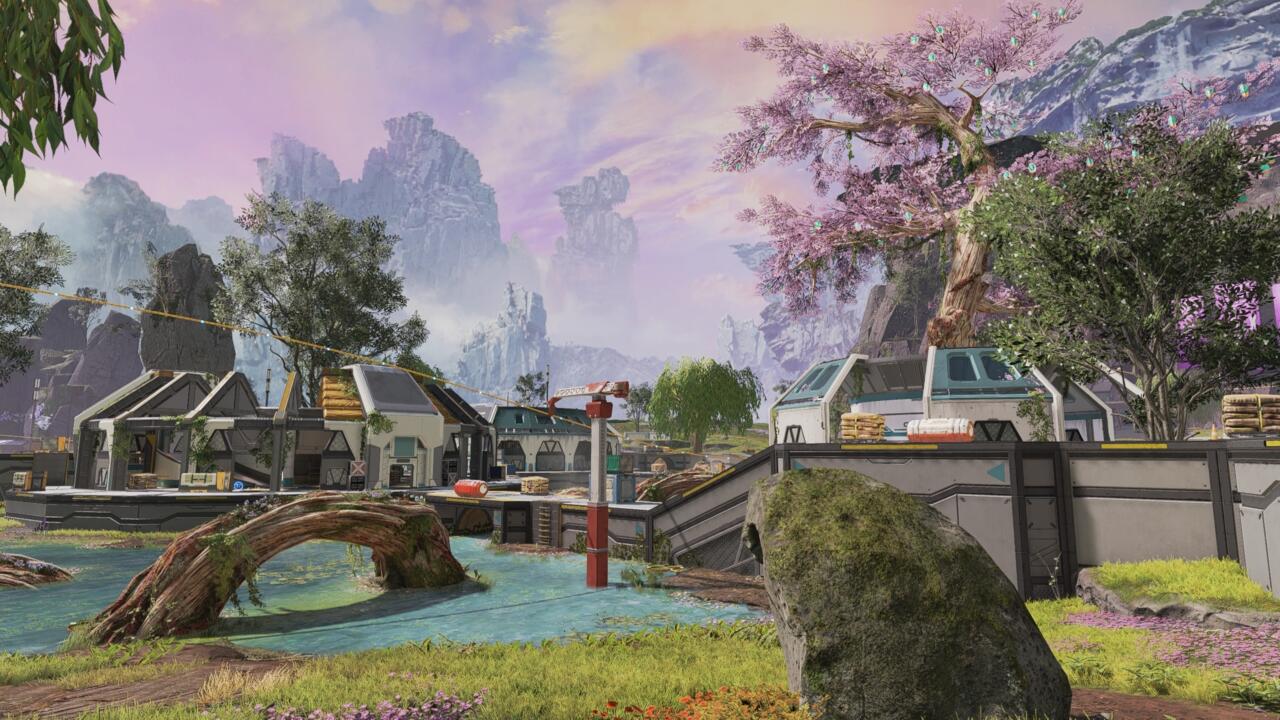 Shaw explains that one of the major goals of Broken Moon was to create a map where the traditional flow and feel of a match is broken. The zip rails contribute to this, further spreading squads out to the outer POIs and keeping them there longer. The other contributing factor is Broken Moon’s setup. Despite being on the larger side–Broken Moon is a tad larger than World’s Edge, making it the second largest map in the game–the map only has 16 major POIs. That’s about the same number as Olympus, the second-smallest map in the game. The big difference is in the size of the POIs. Many of Broken Moon’s POIs are massive. »Our objective with including a couple of larger POIs was really to reduce or soften up the hot drop dog piles that we see at the early game–you’ll have a POI and a bunch of squads will all land in the exact same spot and just fight over it and a bunch of people will get eliminated right away, » Shaw said. « We really wanted to give squads a chance to go to that POI but get a little bit more comfortable, and so having a larger POI results in squads having more landing options, there’s a little bit more space to share and more material or loot to gather, and so this often gives squads more time to loot and more time to make proactive decisions about engagements like, ‘Do I get into this fight or do we run away? How do we feel about our situation?’ And so that’s really important to us, that proactive decision-making. »Shaw assures that Broken Moon still does have a few of those « sweaty, smaller POIs » that should encourage squads to drop hot and jump right into the fight. However, a quick glance at Broken Moon’s POIs reveals that a majority of them lean towards that larger size that can support multiple teams. »We divide the map up into different sections in a way, » Shaw told me. « You can go to this POI called Breaker Wharf, and Breaker Wharf is actually these two buildings adjacent to each other, so it would support two teams really, really easily. But it can also support four if you land at either corner and stuff like that. So those were the things that we were experimenting with, just making [POIs] larger, and giving more opportunity to land at a single POI and not always have to be contesting it immediately. Letting people loot up a little bit, and then get into the fight and choose if they want to engage or not. » 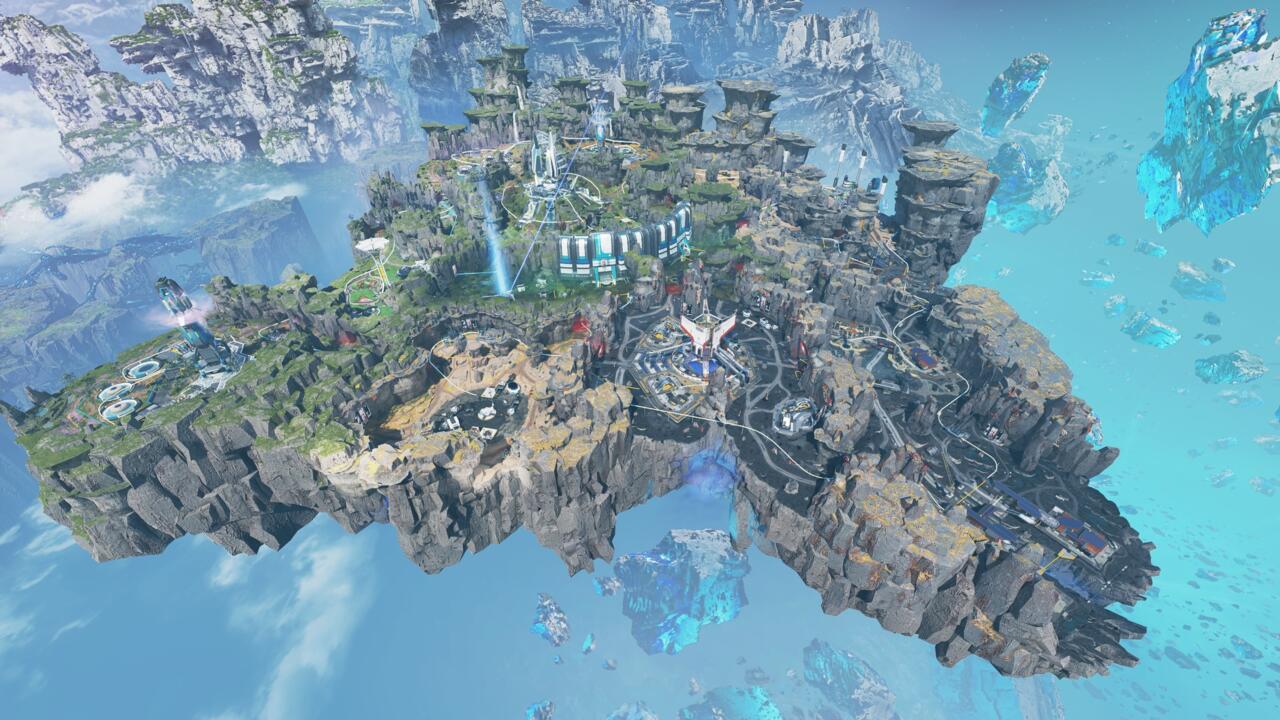 In terms of comparisons to other maps, Broken Moon will also feature redeploy balloons and zip lines, but not the Tridents found on Olympus and Storm Point, nor the gravity canons located on Storm Point. There are updrafts, though, which function similarly to the lava fissures of World’s Edge, but they don’t damage you or prevent you from attacking or using legend abilities.[Updraft] is like a gust of this energy that propels you upwards, » Shaw told me. « We’ve actually designed an entire POI around that mechanic. It’s called the Perpetual Core, and it has these rotating fan blades in the middle, and this electrical blue energy, and when you jump into it’ll lift you up to the top of the point of interest. There’s a little bit of that sprinkled throughout the map, but the main focus for traversal is the zip rails. »PvE combat is remaining exclusive to World’s Edge and Storm Point as well, meaning Broken Moon won’t feature Prowler and Spider Nests or IMC Armories. Environmental hazards aren’t a part of the map either–don’t expect to find molten lava like on World’s Edge or deadly pits like on Olympus. »One of the lessons that we took and we wanted to apply was just not having death pits, because we find those create a bit of a frustrating experience, » Shaw said. « We like including them. It’s a fun tool to have in a level design arsenal, but for this map–you can fall off the edge of the map or the side of the map, but internally in the middle of the map, there isn’t really anywhere that you should be able to fall off to your death. » 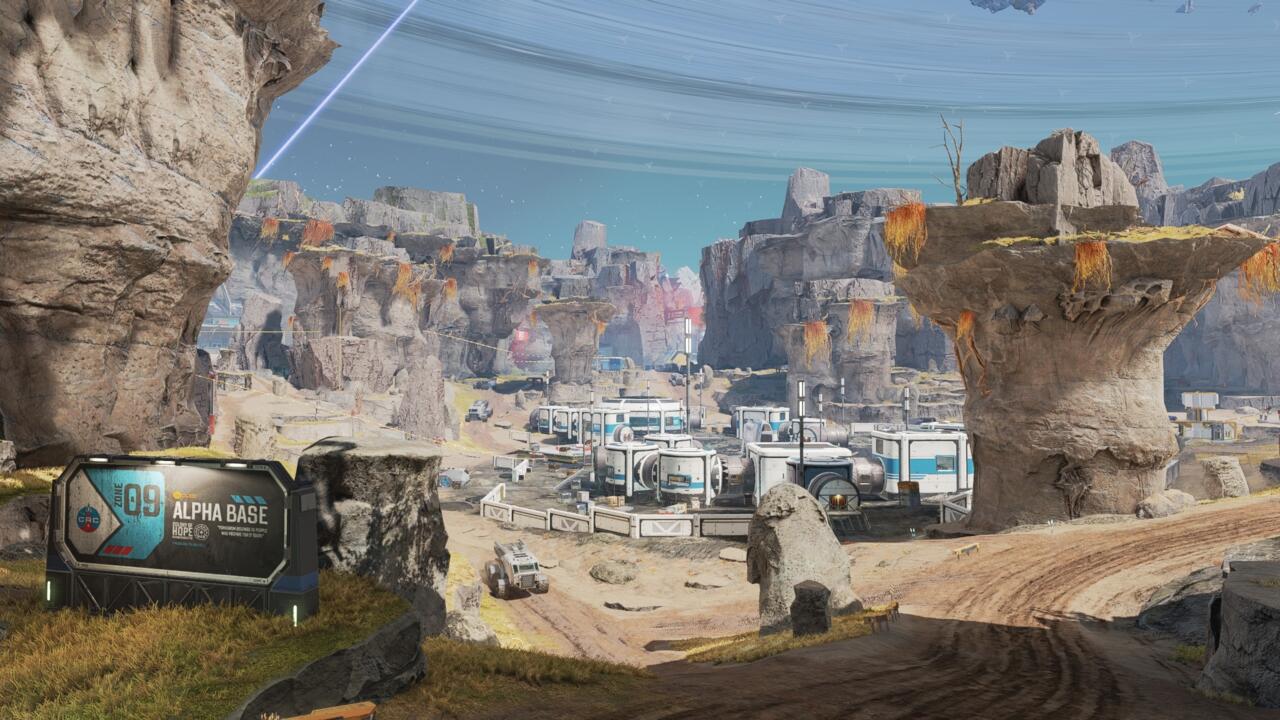 While we talked, Shaw made a lot of references back to Apex Legends’ other four battle royale maps. When I pointed that out, he reiterated that this is the team’s second map that started production after Apex Legends had already been released. Going forward, maps are being built with lessons learned from how people play, not how Respawn presumes people will play. »[Broken Moon] has varying topography–we leaned into what really works and what we really love about Apex, » Shaw said. « It’s a lot of undulation and wide canyon trenches and stuff like that. It’s not flat. We try to avoid making flat maps, so there’s a lot of undulation, a lot of ups and downs, a lot of places where you can climb, and slide and stuff like that. »He continued: « We like to think of Apex as kind of like chess, and so the legends are the pieces and the map is the board. And so when we’re designing a new map, we think about all the ways that the legends could interact with the map, and what they can do, and what is possible and really try to show there’s skill expression for certain legends in the map. Pathfinder can use this grapple in certain ways, or Valkyrie can reach certain areas that for other legends might be a bit trickier and things like that. We take that all into account, and we work really closely with the legends team so that we’re not disrupting each other. We’re really synergizing with each other, and making sure that if they’re making a legend or making a change to a legend, it can work in the map and that we don’t need to break our back or break the maps to reintegrate this legend into the game or whatever. »Broken Moon will be added to Apex Legends at the start of Season 15 on November 1. Alongside Broken Moon, Olympus and World’s Edge will be in rotation for the Trios and Duos playlists in Season 15. For Ranked, Broken Moon will be the featured map for the first split and Olympus for the second.