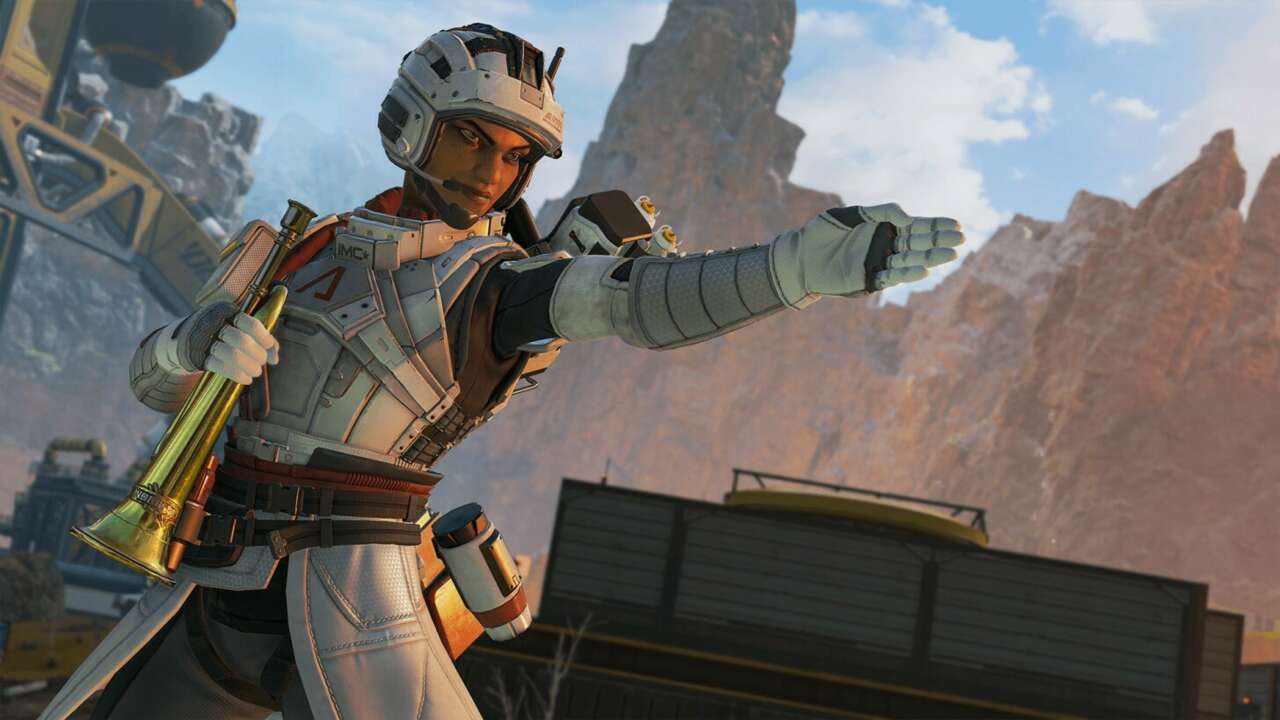 The original Apex Legends hot drop location, Skull Town, as featured on the game’s battle royale map Kings Canyon, is back, now in the form of a self-contained Arenas map. It’s just one part of the game’s new Genesis event, which will also revert Kings Canyon and World’s Edge back to their original layouts for a limited time starting on June 29. »We heard you, » the game’s patch notes read. « Five minutes after we announced Arenas, we were seeing pleas for a Skull Town Arena. Well, here it is! »Apex Legends’ Genesis event will also be adding a number of new cosmetics for players to unlock, ranging from a scythe heirloom for Revenant to legendary skins for both the Charge Rifle and EVA-8 shotgun.Balance updates are coming to the game as well. Revenant has had his hitbox size reduced and received some changes both positive and negative to his abilities, while Lifeline’s hitbox has been slightly increased. Bloodhound is receiving nerfs to their « Eye of the Allfather » scanning ability as well as their « Beast of the Hunt » ultimate, with the devs stating the character has remained « a popular and powerful pick for multiple seasons now. »One of the game’s more dominant weapons, the Spitfire, has received a nerf, with the LMG now being less accurate when fired from the hip. Other weapons, like the Longbow, P2020 pistol, and 30-30 Repeater have been slightly buffed.A number of balance updates are also coming to the 3v3 Arenas mode, with prices for a number of weapons and upgrades being tweaked. Care packages will start landing five seconds earlier than before in order to make the loot within a more viable option before a round ends, while from round 3 onward, players will start with a shield battery in addition to two syringes and two shield cells. Character specific changes will be coming too, such as Pathfinder’s starting Grapple charges being reduced and and the cooldown for Octane’s Launch Pad being increased to every other round.The Apex Legends Genesis event goes live June 29 and runs until July 13. Full patch notes are below:

OctaneLaunch Pad cooldown increased from 60 seconds to 90 seconds.Dev Note: Octane remains the most popular legend by a large margin even after the stim nerf. Turns out jump pads are fun, but with the added utility from the two launch options, it’s only fair to bump up the cooldown.RevenantSlightly slimmed down hitbox (specifically his midsection, arms, and upper legs).Stalker climb height significantly increased. It’s not literally unlimited now, but… that boy can really climb.Silence duration decreased from 20 seconds to 15 seconds.Reduced the duration of death protection by 5 seconds while using the Death Totem.Dev Note: Revenant’s large frame places him at a significant disadvantage in gunfights, particularly against smaller legends who no longer have Low Profile. We’re shrinking some of his hitboxes to counteract this disadvantage, while also improving his ability to climb up walls and attack from unexpected angles. (We know this can be frustrating given how silent he is, so we’ll continue to monitor and add sound if necessary.) That said, we’re taking this opportunity to reduce some of the frustration that comes when playing against his tactical and ultimate.LifelineIncreased hit box size, mostly in the legs and waist.Dev Note: Unlike Revenant, Lifeline excels in gunfights given her small hitbox. Even with the res shield gone, it’s no surprise the smallest character in the game saw an uptick in performance with the removal of Low Profile. She remains small, but these hitbox changes bring her closer to the medium sized legends.BloodhoundEye of the Allfather scan revealed time decreased from 4 seconds to 3 seconds.Beast of the Hunt duration decreased from 35 seconds to 30 seconds. Time can still be added by downing enemies.Dev Note: Bloodhound has remained a popular and powerful pick for multiple seasons now, mostly because of the sheer amount of information that can be gained with one tap of their tactical. Shortening the scan duration still provides a snapshot of information for Bloodhound’s team without stifling all enemies caught anywhere in the large range for a full 4 seconds.WattsonMajor Buff: Wattson can now place more than one Nessie on the map at a time with her Epic emote.Dev Note: There can now be up to 20 Nessies active at once on any given map. Until that cap is reached, any Wattson can place as many as she likes. When the cap is hit, the oldest Nessie belonging to the Wattson who currently owns the most Nessies is removed.

Party CrasherAdjusted circle logic to favor downtown a bit more.Simplified the minimap’s visual language.Phase RunnerRaised cover height on certain props throughout the map to prevent unfair advantages to large rig Legends.Added a few trees to reduce the ease of spawn sniping (looking at you, Reptar…).

The UI for Purple devotion now shows the attached turbocharger.Players will no longer be chosen as Jump Masters during the legend select screen.Updated the sniper stock to show an empty slot when needed.Can no longer get stuck in the crouch position after dying while reviving a teammate during a round in Arenas.

ValkyrieUpdated fuel gauge UI to better indicate when you’re using fuel and when you’re running low.RampartWill now have custom animations for LMG reload. These have no impact on her current reload times.MISCAdded VO for when your Ultimate is ready, or not ready. When your Ultimate gets to 100%, you’ll be prompted to tell your team with new VO for each Legend.At any point in time, you can ping your Ultimate icon (in your inventory) to show your teammate what percentage you’re at (in quickchat).Added VO for when you enter a Replicator, so your teammates know you are crafting and won’t leave you behind! Probably.Added VO for pinging a friendly Trident, in addition to the neutral and enemy states that already existed.You can now turn off FOV scaling when certain abilities are used. Look in the options.Reduced the frequency of Ring endings near out-of-bounds areas (like canyon walls or map edges).Healing items will now play the entire healing sound when used by other players, instead of just the beginning and ending.Muting players will now also mute text to speech.

BloodhoundPassive tracker icons will no longer be shown in the end-of-game screen.CausticFixed an issue with enemies not getting highlighted when in Caustic’s Nox Gas.FusePlayers can now see the number of grenades in the grenades stack when viewed on floor.Fixed the 1P arm color on “Board to Death” to match the 3P view.Fuse will no longer produce a third arm when ADS’ing and using the tactical at the same time.GibraltarBeing struck by a direct hit of Fuse’s Knucklecluster will no longer cause Gibraltar’s Gun shield to take unnecessary damage.Gibby’s Ultimate will no longer damage a friendly’s Horizon’s Ult.Gun Shield will no longer take additional bleed through damage.HorizonHorizon’s tactical will no longer ascend Caustic’s gas traps or Octane’s Jump pads to the heavens.Fixed an issue with the appearance of Horizon’s teeth when using the « Golden Boson » skin.LifelineLifeline will no longer use Wraith’s animations while in the boxing ring.Enemy Care packages will now have loot if the enemy Lifeline leaves the game before it lands.Fixed an issue that was preventing Lifeline’s tactical from functioning properly while in Caustic gas.LobaCompleted another pass to prevent Loba from getting into unallowed areas.Fixed an issue causing Loba’s tactical to improperly fail on the Phase Runner map in Arenas.Fixed an issue that caused Loba’s tactical to be improperly disrupted by Horizon’s gravity lift.MirageCorrected an issue with Mirage flickering while in the Lobby.OctaneFixed obstructed ADSing while using the Compound bow and the 3x sight.PathfinderCan no longer swap weapons faster if the holster animation is canceled.Did a Zipline pass on Arena Maps to prevent Pathfinder getting into unfair positions.RampartFixed a logic error when using Wraith’s Portal and Sheila at the same time.Did a pass to allow more places to place Amped Walls on Olympus.Fixed an audio issue with Rampart’s Tactical when in close quarters.Fixed an issue with Sheila disappearing off of Rampart’s back if shot during an emote.Players no longer fall under the ground when using Shelia on certain slopes.RevenantDeath Totem can now be damaged in Firing Range.ValkyrieDid an environment pass to prevent Valk from entering areas not meant to be entered.Amped cover will no longer push players into geo if Skyward Dive is initiated near it.Valkyrie’s Ult UI no longer remains on screen if observer switches to another POV.First person view no longer obstructed when using a shield battery.Fixed an issue with players not being able to cancel being hooked up to Valks Ult.WattsonWattson no longer uses Wraith’s animation in the boxing ring.The Nessie that Watton leaves behind with her Epic emote should no longer fall over dead when using a Legendary skin.WraithAddressed a bug that sometimes caused Wraith’s portal to improperly appear as open after a player entered it just before it closed.OtherFixed a bug where players have to play one Ranked game after a Season or Split reset for the reset to fully take effect. Note that players who have not played a Ranked game recently before this update will still have to play one more game of Ranked with their RP changing before this bug is completely fixed.Matchmaking will be canceled if the party leader changes the playlist to a mode that a party member is not eligible for.Fixed an issue preventing Switch users from scrolling through all their emotes while in handheld mode.Resolved an issue that was sometimes slowing down controller players’ turn speeds when running at high FPS.Addressed some audio issues with Phoenix Kits.Entering the Fight Night ring on Olympus should no longer cause you to experience glitches with gunfire audio.Solved a performance problem caused by having large numbers of friends via Steam and/or Origin.Knocked legends can now open the inner door inside Explosive Holds as normal.Your scope sight should no longer flicker when ADSing using the Bocek Bow while riding a Trident.Similarly to the above, ADSing with the Bocek Bow while riding a zipline should no longer cause flickering.Resolved an issue that was preventing ping VO from playing when at a distance from teammates.Fixed an issue that sometimes prevented players from joining a friend’s lobby when using the « join » button from the Friends tab.Solved an issue that was preventing Respawn beacon audio from triggering properly.Fixed some buttons with weird « hitboxes » in the Clubs tab.Rejecting invites from the Clubs tab should now work as expected.Fixed an issue that sometimes prevented loot from appearing as expected in death boxes.The consumables interface should no longer show up on the podium screen.Resolved a rare bug that allowed you to use a Shield Battery even when shields were full.Fixed an issue preventing some colorblind settings from appropriately changing the color of enemy HP bars.Colorblind settings are now properly applied to trackers in the Legends tab.Addressed an issue that sometimes caused the ring to become silent for recently-respawned players.Solved a bug with « Death UI » being shown to players who reconnected early in the match.The « random » music pack should no longer play default music on the match summary screen or the lobby.Fixed some VFX issues with Legendary knockdown shields.